Skip to content
:Home>>Rheumatology>>Adalimumab Versus Biosimilar: How Do These Drugs Compare in RA, PsA, PsO?

Adalimumab Versus Biosimilar: How Do These Drugs Compare in RA, PsA, PsO? 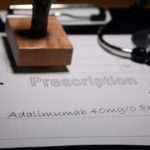 ADACCESS and ADMYRA were both phase III studies, with the former including 465 patients with PsO and the latter including 353 patients with RA (ADACCESS also included patients with PsA). The studies compared the biosimilar versus reference adalimumab regarding efficacy, safety, and immunogenicity. In ADACCESS, beginning at week 17, a third of patients underwent four treatment switches between study treatments. In ADMYRA, beginning at week 24, the entire cohort was switched from reference adalimumab to SDZ-ADL. ADACCESS evaluated patients’ PROs using the Dermatology Life Quality Index (DLQI) and EuroQol five-dimension health status questionnaire (EQ-5D-5L), ADMYRA used the Functional Assessment of Chronic Illness Therapy–Fatigue Scale (FACIT-Fatigue) score, and both studies used the Health Assessment Questionnaire–Disability Index (HAQ-DI).

In ADACCESS, both groups experienced comparable decreases in DLQI from baseline to week 17; the mean percent reduction in the SDZ-ADL group was 64.5% (standard deviation [SD], 80.3%), and in the adalimumab group, 70.6% (SD, 41.7%); outcomes remained similar at the week 51 switch. In the PsA group in the ADACCESS study, decreases were observed in mean HAQ-DI scores from baseline in both treatment groups, with no significant between-group differences at week 17 or after switching at week 51. In ADMYRA, there were no significant between-group differences in attaining normal-range HAQ-DI at week 24 or after switching at week 48. Both groups presented increases in mean FACIT-Fatigue scores.

The study was published in BioDrugs.