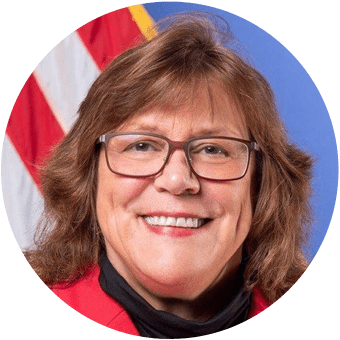 Mary Ann is the associate director for patient care services/nurse executive at the San Francisco Veterans Affairs Healthcare System. Despite her primarily administrative role, Mary Ann continues to practice as a psychiatric mental health nurse practitioner. She established the first Psychiatric-Mental Health Nurse Practitioner (PMHNP) residency program at the San Francisco VA in conjunction with the University of California, San Francisco, where she is associate clinical professor at the School of Nursing. In 2018, she received the VHA John D. Chase Award for Executive Excellence in Healthcare. She is a nationally known speaker as an early integrator of biology in psychiatric mental health nursing and has spent much of her career developing and working with community agencies on crisis management. She is a founding author and current chair of the board of directors for Professional Assault Crisis Training, Inc. (Pro-ACT).  She received her bachelor’s and first master’s degree from the University of Iowa College of Nursing and a second master’s degree in psychology from the California School of Professional Psychology. For thirty years, she chaired a national psychiatric nursing annual conference, where she sought and developed many early career speakers with specialties in psychiatric nursing. She is a past president of the American Psychiatric Nurses Association (APNA), past lead coordinator for the Nursing Organization Alliance (NOA), past board member for the National Association Nurse Practitioners in Women’s Health (NPWH), and an award winner of the APNA Psychiatric Nurse of the Year.  She currently chairs the APNA Clinical Psychopharmacology Institute.