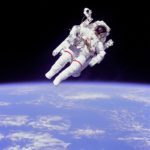 Extended time in a weightless environment like space, or as in extreme swimming, could result in a shrinking of the heart, according to a new study.

“Benoit Lecomte swam 2,821 kilometers over 159 days, and Scott Kelley spent 340 days in space,” the authors wrote. “What do extreme-duration swimming and extreme-duration spaceflight have in common, and how are they different? Both are associated with the removal of gravitational loading of the musculoskeletal system and the absence of weight-bearing activities.”

The authors reported that both individuals, who gave permission to have their data used in the research letter, experienced a loss in left ventricular mass over the durations of their respective campaigns, despite significant amounts of exercise. They reported similar rates of decline in both subjects (Lecomte’s mass dropped by 0.72 g/week and Kelly’s mass dropped by 0.74 g/week after application of linear regression). Lecomte swam for an average of 5.8 hours per swimming day, sleeping eight hours per night. Kelly spent 340 days in space and was prescribed an exercise program that included cycling, treadmill, or resistive exercise six days per week. Both individuals experienced an initial drop in left ventricular diastolic diameter to a lower steady state through their respective campaigns.

“These individuals and their extraordinary feats provide unique insights into the effects of extreme duration swimming and spaceflight,” the authors wrote. “Extended loss of gravitational hydrostatic gradients through weightlessness or prone positioning in water immersion without proper countermeasures resulted in a loss of cardiac mass. “Consistent, low-intensity exercise may be insufficient to prevent cardiac atrophy during extreme-duration swimming, though further study is needed.”