Skip to content
:Home>>Cardiology>>Study: Aspirin Not As Effective As Anticoagulation in Some Patients

Study: Aspirin Not As Effective As Anticoagulation in Some Patients 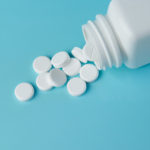 Important new research has indicated that aspirin may not be as effective at anticoagulation in patients with cervical artery dissection.

The study included 194 patients with cervical artery dissection who were randomly assigned (1:1) to either 300 mg aspirin once daily or to a vitamin K antagonist for 90 days. The primary outcomes of interest was a composite of stroke, major hemorrhage, or death (clinical outcomes) as well as new ischemic or hemorrhagic brain lesions (MRI outcomes). Non-inferiority was demonstrable if the upper limit of the two-sided 95% CI of absolute risk difference between the study groups was <12% (non-inferiority margin).

One hundred patients were assigned to the aspirin regimen and 94 to the vitamin K antagonist group. According to the study results, the primary study endpoint occurred in 21 (23%) of 91 patients in the aspirin per protocol group and in 82 (47%) in the vitamin K antagonist per protocol group (absolute difference, 8%; 95% CI, -4 to 21). Thus, aspirin did not show non-inferiority.

According to a news release published with the study results, the researchers highlighted potential impact on guidelines:

“The study suggests that the evidence to consider aspirin as standard of care in patients with cervical artery dissection is insufficient. Aspirin cannot simply replace conventional standard therapy with a blood thinner. With the results of this study, however, a general superiority of blood thinning with anticoagulation has not yet been proven. The investigation of further aspects and a review of the benefit-risk profiles must provide more precise information.”

The study was published in The Lancet Neurology.

My mentors at MGH (“Must Give Heparin”) will be smiling (Ferdi Buonanno!) : Aspirin versus anticoagulation in cervical artery dissection (TREAT-CAD): an open-label, randomised, non-inferiority trial https://t.co/kHN1wD3n0P . @ChaturvediNeuro @MGHNeuroICU @Braindoc_MGH