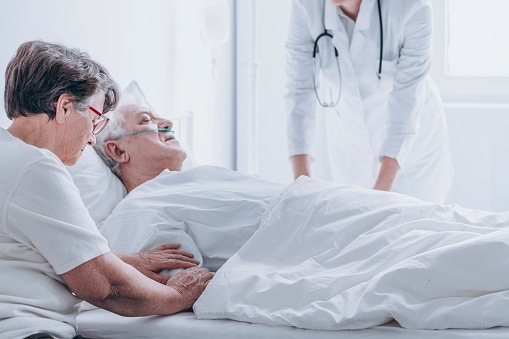 A new research letter in Circulation suggested that the spouses of those hospitalized in an intensive care unit (ICU) are at an elevated risk for suffering cardiac events or hospitalizations themselves.

“A patient’s admission to ICU puts acute psychological stress on family members, and that stress may increase the risk for cardiovascular disease particularly for the other spouse,” senior author Hiroyuki Ohbe, MD, MPH, a PhD student in the department of clinical epidemiology and health economics in the School of Public Health at The University of Tokyo, said in a news release.

A Japanese research team conducted the matched-pair cohort study focusing on married couples registered in a database between 2005 and 2018. The researchers identified spouses of patients who were admitted to the ICU for more than two days, and for the rest of the study population, randomly selected one spouse in the exposure group to four individuals who were not in the exposure group. The primary study outcome of interest was any visit for cardiovascular diseases (defined by diagnoses within the International Classification of Diseases. The researchers evaluat5ed outcomes in the time periods of one to four weeks, five to eight weeks, nine to 12 weeks, and 13 to 16 weeks after spouse admission to the ICU for each matched pair.

“This study suggests, for the first time, that the ICU admission of a spouse can be a risk factor for cardiovascular events in the one to four weeks after the date of the spouse’s ICU admission,” the researchers concluded in the letter.