Skip to content
:Home>>Hematology & Oncology>>Can Gastric Cancer Be Detected by a Breath Analyzer?

Can Gastric Cancer Be Detected by a Breath Analyzer? 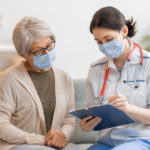 A breath analyzer may be able to identify gastric cancer, a study discovered.

“Detection of disease by means of volatile organic compounds from breath samples using sensors is an attractive approach to fast, noninvasive and inexpensive diagnostics. However, these techniques are still limited to applications within the laboratory settings,” the researchers explained. “Here, we report on the development and use of a fast, portable, and IoT–connected point‐of‐care device (so‐called, SniffPhone) to detect and classify gastric cancer to potentially provide new qualitative solutions for cancer screening.”

A total of 274 patients were stratified into three groups: those who had gastric cancer (n=94), patients with high-risk precancerous lesions (n=67), and controls (n=113). Two SniffPhones were used to analyze patients’ breath. The researchers implemented linear discriminant analysis (LDA) as a classifying model of the sensing signals that were derived from the patients. There was a second device added to the testing step.

When using the two-device LDA model, the researchers observed “a clear discrimination” between patients with gastric cancer versus controls: the area under the curve was 93.8%, sensitivity was 100%, specificity was 87.5%, and overall accuracy was 91.1%. Among patients with dysplasia, the outcomes were also considered acceptable: area under the curve, 84.9%; sensitivity, 45.2%; specificity, 87.5%; and overall accuracy, 65.9%. Although accuracies were lower in the test-phase analysis, the researchers stated they could still be considered “clinically useful.”

The study was published in Cancer.

“Our results demonstrate that a portable breath sensor device could be useful in point‐of‐care settings. It shows a promise for detection of gastric cancer as well as for other types of disease.”