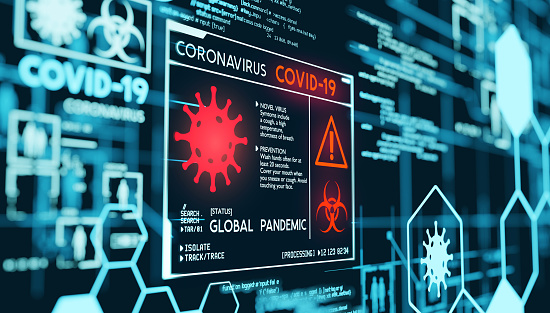 On Tuesday, October 20, 2020, the world has hit another grim milestone by surpassing 40 million confirmed cases. Cases are trending upward in both the US and Europe, and the coming months appear dire. Overall, here are the latest COVID-19 numbers, according to Worldometer:

Countries Outside of the US with Most Infections:

US States with Most Confirmed Cases:

A vaccine scientist is warning that the next four to five months may be the worst of the COVID-19 pandemic. “The key is now hanging on now for the next four or five months, where we’re going to enter what may be the worst period during this epidemic. As bad as it’s been, it’s about to get worse,” Peter Hotez said on CNN’s “New Day.” “We could be looking at a doubling of the number of deaths by the week after the inauguration. This is tough stuff. What I’ve been trying to explain to people is it will get better, but we’re going to go through a terrible period.”

Stocks Are Up Today

US stocks opened higher today amid the hope for a stimulus deal before the fast upcoming election.

Cases of COVID-19 are on the rise in the US, with only two US states showing a downward trend – Hawaii and Vermont. That leaves 21 states showing steady trends, and 27 states trending upward. “The next six to 12 weeks are going to be the darkest of the entire pandemic,” said Michael Osterholm, director of the Center for Infectious Disease Research and Policy at the University of Minnesota, told NBC’s”Meet the Press” on Sunday.

Unemployment Claims on the Rise

Americans filed 898,000 jobless claims last week, according to the Department of Labor. The number is more than economists projected, and up 53,000 from two weeks ago. Although jobless claims have dropped considerably since its peak in late March, those improvements have recently reversed. However, while an additional 372,891 Americans filed for Pandemic Unemployment Assistance, that number is down by 91,000 from the previous week.

32 US States Trending in Wrong Direction

Over 20 US states are reporting an upward trend in COVID-19 cases, with 59,494 new cases reported yesterday alone, according to Johns Hopkins University. As of Thursday, the US is now averaging well over 52,000 cases a day, which is up 16% from the previous week. “This is a very ominous sign. I think we’re in for a pretty bad fall and winter,” said Dr. Peter Hotez, professor and dean of tropical medicine at the Baylor College of Medicine.

Drugmaker Eli Lily paused its trial of a combination antibody treatment for COVID-19 due to undisclosed safety reasons. “The trial, evaluating Lilly’s investigational neutralizing antibody as a treatment for COVID-19 in hospitalized patients, is sponsored by the National Institute of Allergy and Infectious Diseases (NIAID), part of the National Institutes of Health (NIH). Lilly is supportive of the decision by the independent DSMB to cautiously ensure the safety of the patients participating in this study,” the company said in the statement.

Small social gatherings have become a growing source of COVID-19 spread, according to a leading health expert, as infections and hospitalizations rise nationwide. “In the public square, we’re seeing a higher degree of vigilance and mitigation steps in many jurisdictions,” US Centers for Disease Control and Prevention Director Dr. Robert Redfield said during a call with the nation’s governors on Tuesday, in audio obtained by CNN. “But what we’re seeing as the increasing threat right now is actually acquisition of infection through small household gatherings,” Redfield said. “Particularly with Thanksgiving coming up, we think it’s really important to stress the vigilance of these continued mitigation steps in the household

President Donald Trump has tested negative for COVID-19 for consecutive days and is not infectious to others, according to his physician. Physicians used antigen tests from Abbot, along with laboratory data included with viral load to determine Trump’s risk for spreading the virus. “This comprehensive data, in concert with the CDC’s guidelines for removal of transmission-based precautions, have informed our medical team’s assessment that the President is not infectious to others,” Dr. Sean Conley said in a memo.

Pharmaceutical giant Johnson & Johnson said Monday that it has paused the advanced clinical trial of its potential coronavirus vaccine due to an unexplained illness in one of the volunteers. “Following our guidelines, the participant’s illness is being reviewed and evaluated by the ENSEMBLE independent Data Safety Monitoring Board (DSMB) as well as our internal clinical and safety physicians,” the company said in a statement. “Adverse events — illnesses, accidents, etc. — even those that are serious, are an expected part of any clinical study, especially large studies.”

President Donald Trump insists he no longer has coronavirus, despite the fact that The White House refuses to say whether he has tested negative for the virus. Hours after his physician issued a memo saying he is no longer “a transmission risk” to others, Trump said in an interview on Fox News he no longer has the virus, and is now immune. Moreover, Trump announced in an audio message that he tested “totally negative” for COVID-19, which goes beyond the memos released by his medical staff.

Twitter added a warning label to a Trump tweet that claimed, with no backing evidence, that he is now immune to COVID-19 after his physician cleared him to resume public activities. Twitter’s warning label says the tweet, it “violated the Twitter Rules about spreading misleading and potentially harmful information related to Covid-19.” While Trump posted the same claim to his Facebook account, thus far the platform has done nothing to flag it.

Cases Going Up in More than Half of US States

Data show that more than half of US states are seeing an increase in COVID-19 cases, and five states – Montana, New Mexico, North Carolina, Tennessee and Vermont – report an increase of more than 50% in one week.

President Trump’s doctor said that the President has completed his coronavirus treaments and is cleared to resume “public engagements” on Saturday. “Saturday will be day 10 since Thursday’s diagnosis, and based on the trajectory of advanced diagnostics the team has been conducting, I fully anticipate the president’s safe return to public engagements at that time,” Dr. Sean Conley said.

Regeneron Applies for Emergency Use for Antibody Therapy

Regeneron has applied for to the US Food and Drug Administration for emergency use authorization for its experimental monoclonal antibody therapy. This cocktail was used to treat President Donald Trump’s coronavirus infection. The company confirmed on its website the submission of emergency use to the FDA. “Under our agreement with the U.S. government for the initial doses of REGN-COV2, if an EUA is granted the government has committed to making these doses available to the American people at no cost and would be responsible for their distribution,” the statement said. “At this time, there are doses available for approximately 50,000 patients, and we expect to have doses available for 300,000 patients in total within the next few months.

University of Notre Dame President  Rev. John I. Jenkins  is facing a student petition for his resignation and a possible “no confidence,” by faculty following his COVID-19 diagnosis. Students are furious that Jenkins attended the nomination ceremony for Amy Coney Barrett at the White House Rose Garden on Sept. 26 without donning a mask and failing to adhere to social distancing.

Amtrak says without $5 billion in stimulus funds from the federal government, it will layoff 2,400 workers while reducing the frequency of trains on some routes, and halting major improvement projects. “We have seen that our ridership is not returning as quickly or at the levels that we had hoped for,” Amtrak president and CEO William J. Flynn wrote in a Thursday letter to Vice President Mike Pence and House Speaker Nancy Pelosi.

New Jersey reports 1,301 new cases of COVID-19 on Thursday – the state’s highest total of new cases since May 29. “This is a sobering number,” said New Jersey Governor Phil Murphy. The positivity rate for NJ is ow at 3.69%.

US States with Most Infections:

Tonight Vice President Mike Pence will go head-to-head in debate with Democratic Senator Kamala Harris. In response to the White House coronavirus outbreak – a number of new safety protocols are in place. Pence and Harris will have to stand more than 12 feet apart (instead of the standard six), using plexiglass as barriers between the two. Also, everyone in the audience will be required to wear masks. Both VP Pence and Sen. Harris have tested negative for COVID-19 going into tonight’s debate.

The White House declined offers from the CDC to help investigate the source of the outbreak that lead to President Trump’s COVID-19 infection.

FDA Demands Safety Before Any Vaccine is Approved

The US Food and Drug Administration stated on Tuesday that it wants to see two months of follow-up data after volunteers get their second dose of a coronavirus vaccine as part of clinical trials testing potential coronavirus vaccines. This request will make it near possible for any vaccine maker to apply for emergency use authorization by election day or the end of this month.

Only Four US States are Trending Downwards

CDC Once Again Updates Guidance to Say COVID-19 is Airborne

The US Centers for Disease Control and Prevention (CDC) has once again updated its guidance about how COVID-19 can spread. “Today’s update acknowledges the existence of some published reports showing limited, uncommon circumstances where people with COVID-19 infected others who were more than 6 feet away or shortly after the COVID-19-positive person left an area. In these instances, transmission occurred in poorly ventilated and enclosed spaces that often involved activities that caused heavier breathing, like singing or exercise. Such environments and activities may contribute to the buildup of virus-carrying particles.”

Biden States He Will Debate Trump is Scientists Approve

Joe Biden will listen to the doctors, he said when asked if he would debate President Trump if he were healthy by their next scheduled debate on Oct. 15.  “If the doctors — listen to the science. If the scientists say that it’s safe and the distance are safe, then that’s fine. I’ll do whatever the experts say is appropriate to do.”

New Jersey Governor Phil Murphy said that President Trump was reckless for deciding to Bedminister rally last Thursday in NJ after his adviser, Hope Hicks, has tested positive for coronavirus. “We continue to send out best wishes and prayers to the President, the First Lady and former Gov. Chris Christie and all that have tested positive over the weekend. This is not a matter of politics but a matter of humanity, but this is also a matter of leadership by example and it is clear that the President and his staff acted recklessly in the first place knowing they had been exposed to someone with a confirmed positive test,” Murphy said.

Health Care Workers Should Be At Front of Vaccine Line

Frontline health care workers should be the first to receive COVID-19 vaccinations, according to experts advising the federal government. Following health care workers, then should come older adults living in congregate settings, like nursing homes, a National Academies of Sciences, Engineering, and Medicine (NASEM) committee said in a final report.

Sadly, 32,000 airline employees are losing their jobs today after attempts to receive federal money failed. American Airlines is cutting 19,000 jobs, and United Airlines is cutting 13,000 jobs. United CEO Scott Kirby said the decision marked “”a very sad day for all of us here at United.”

American Airlines CEO Doug Parker had said in an interview with CNN that he hoped the layoffs could be avoided if the airlines and Congress could reach a deal, that has yet to occur.

The COVID-19 Pandemic: May Round-up