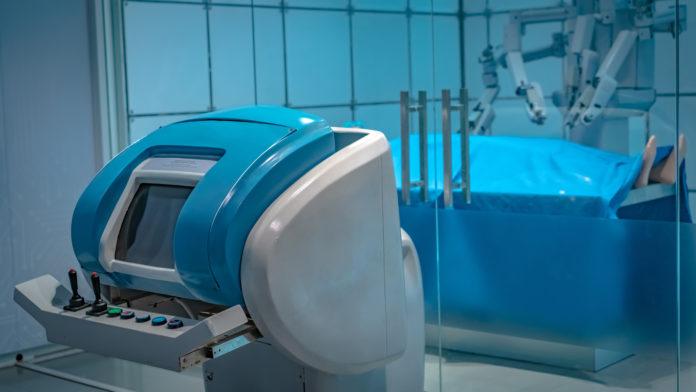 A team from the University of Leeds have made a breakthrough on semi-autonomous colonoscopy with a magnetic endoscope using robotic assistance, enabling non-expert users to perform the procedure in vivo.

Early diagnosis for colorectal cancer can substantially improve survival rates, but more than half of cases are diagnosed late due to demand for colonoscopy, the standard for colon screening, exceeding capacity. Colonoscopy can also be costly, time consuming, and painful for the patient.

“The technology [for colonoscopy] has remained relatively unchanged for decades,” Pietro Valdastri, Professor of Robotics and Autonomous Systems at Leeds, and research supervisor, said in a press release. “What we have developed is a system that is easier for doctors or nurses to operate and is less painful for patients.”

The process utilizes a robotic arm to manipulate a magnetic capsule-shaped device tethered to a cable and inserted into the patient’s anus. The capsule is maneuvered using magnetic force from another magnet attached to the arm itself, which is positioned over the patient to navigate the capsule through the colon from the outside. Guiding the robotic arm can be done manually, but the Leeds team has developed different levels of robotic assistance that can aid even a non-specialist to carry out the procedure.

In a laboratory simulation, 10 non-expert staff were asked to maneuver the capsule to a point within the colon within 20 minutes and repeated the process five times using three different levels of robotic assistance. Participants had a 58% success rate when manually manipulating the robotic arm themselves. Success jumped to 96% with the use of intelligent endoscope teleoperation, and 100% using semi-autonomous navigation.

In another stage, two participants navigated a conventional colonoscope into the colons of anesthetized pigs, and then repeated the task with the magnetic-controlled robotic system with varying levels of assistance. Participants were then scored on the NASA Task Load Index, to measure how taxing the procedure was physically and mentally. Both participants reported finding it easier to operate the colonoscope using robotic assistance.

Findings from the pilot simulation of the robotic assistance system have been published in Nature Machine Intelligence, and patient trials could begin as early as next year.

We had a sneak peek of the data at #UEGweek in a talk by @PietroValda – now the paper is out in @NatMachIntell, autonomy in robotic #colonoscopy with magnetic endoscope https://t.co/Sr7FQ8xE7S

The future of colonoscopy is Robotic magnetic colonoscopy, as per the latest @Nature paper.

Robots may soon be performing all endoscopies, instead of human Gastroenterologists!! https://t.co/L7klQ3hZSE pic.twitter.com/XPqutzJU5q