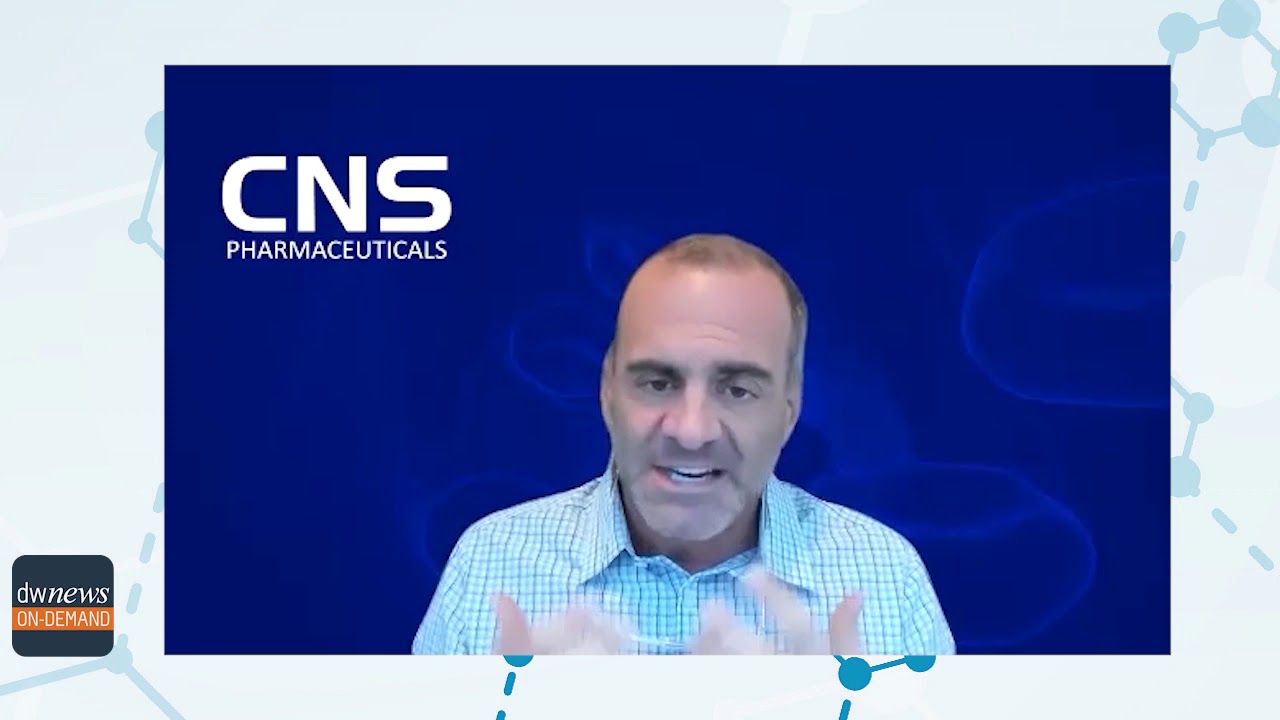 DocWire News: So, let’s start out with some background, can you tell us a little bit about yourself and the company as well?

John Climaco: Sure. I’ve been in biotech and molecular diagnostics for about 20 years. I started at a molecular diagnostics company that was primarily backed by Johnson & Johnson, I ran that for about a decade, sold it, was involved in a number of different biotech ventures and public boards. I eventually met Dr. Waldemar Priebe, our founder, who’s a professor of medicinal chemistry at MD Anderson and an expert on anthracyclines, which is the class of drugs that contains our lead compound Berubicin.  And I got really excited about this possibility of a new treatment for glioblastoma, which is one of the most difficult cancers to treat of any cancer. That was about three and a half years ago. Since then, we’ve taken the company public on the NASDAQ under the ticker CNSP. As you said at the beginning, we submitted to FDA an IND application to study Berubicin in a randomized controlled study for recurrent GBM, for which there is currently no approved therapy anywhere in the world. So we’re quite excited to get started.

DocWire News: Tell us a little bit about Berubicin, specifically how it works to combat this type of brain cancer.

John Climaco: Sure. I’ll tell you it’s a really interesting molecule. I’ll say something that a lot of CEOs might not say, which is in many ways there’s nothing novel about Berubicin. Berubicin is an anthracycline, so this is a class of drugs that has been around for 60 years. It’s a first-line therapeutic for all kinds of different cancers from breast cancer, lung cancer, ovarian cancer, you name it, anthracyclines are used to treat these cancers. They are very potent poisons, been in use for a long time, well-established toxicity and side effect profile, dosing regimens, everything.

I like to say there’s not an oncologist in the world that doesn’t know how to use an anthracycline. So, what’s the trick with Berubicin? Well, anthracyclines typically don’t across the blood-brain barrier. The blood brain barrier is this very specialized network of endothelial cells that surround our brain and basically keep harmful substances out of the brain, for obvious reasons. So most chemotherapy drugs are on the do not admit list, if you will, for the blood-brain barrier and anthracyclines historically have been no go. They simply don’t pass.

So what Dr. Priebe did was a type of innovation that is just, I think it’s so elegant and it’s what really got me excited and why I came to the company. Because what he did was, he essentially combined this very tried and true class of drugs that everybody understands, payers, regulators, clinicians, they all know how to use these drugs. But he made a very simple modification to a base anthracycline molecule.

He started with a drug called doxorubicin, which is a very commonly known and used anthracycline, and he added, to get a little technical, he added a Bentall group to the glycine ring of this molecule. In so doing, he made it highly lipophilic, which means it’s got an affinity to a lipid fat rich environment, and our brain is the most lipid environment in the body.

And so that simple modification allows this molecule that, without it would be stopped by the blood-brain barrier, to actually cross the blood-brain barrier very efficiently. It gets into the brain, and now here’s the really cool part. When it’s in the brain, it’s going to do what every other anthracycline does. In this case, it’s an inhibitor of an enzyme called topoisomerase II. That’s an enzyme that basically cleaves the double helix of DNA as part of the unwinding process When a cell replicates.

Now in the adult brain, we don’t have a lot of rapidly dividing cells normally, but if you’ve got a cell in the brain that’s rapidly dividing, it’s probably a tumor cell, like a GBM cell. It’s going to over-express this enzyme that Berubicin is designed to inhibit. So not only is it going to cross the blood-brain barrier, but you’re going to have selective uptake in the cells that we want to destroy.

So Berubicin then is a very potent inducer of apoptosis, it’s a very potent inhibitor of cell growth, it’s a very efficient molecule because it crosses the blood-brain barrier in high concentrations, so we don’t have to flood the body with this poison in order to get just a little bit into the brain. We can basically give it in a very low dose, which limits its toxicity and side effects, gets into the brain, and then it acts just like a molecule that oncologists are familiar with for six decades.

And I love that because in my 20 years, what I’ve found that sometimes the hardest distance to cross in bringing innovation to the clinic is the last half mile. When you’re talking about rank and file clinicians who are sitting there in the exam room and they have to make a decision with their patients, people who don’t have much time left if they have GBM. What am I going to give this patient versus everything else? And in my estimation, if you’re that clinician, and you’ve got a choice and you’re going to say, “Well, I have an opportunity to give them something that looks and behaves and acts and has side effects just like something that I’ve been working with my whole career, except it gets into the brain,” I’m probably going to do that.

This drug had very exciting data in the phase one. 44% of patients received a clinical benefit of stable disease or better, which is one of the gold standards in GBM. Three patients had their tumors shrink. One patient actually is still alive today, 14 years after treatment with Berubicin and cancer-free from a documented case of GBM. And that’s almost unheard of. So we’re very excited to begin enrolling patients early part of next year in this study.

DocWire News: And that phase two study, you want to talk about how it will be conducted?

John Climaco: Yeah. So it’s going to be a multicenter randomized controlled study. We’ll be randomizing, which is the current standard of care for recurrent GBM, although that drug is not approved for that use, which I think speaks volumes about just how bad the landscape is for GBM patients, when you have to use unapproved drugs as the standard of care. But we’ll be randomizing against that. We’re probably looking in the neighborhood of around 250 patients. We expect interim analysis in the first part of 2022. But one of the interesting things about our company is we have a terrific partnership with a company in Poland, WPD Pharmaceuticals. They are a sub licensee for Eastern Europe, and they received a $6 million grant from the EU to conduct two clinical studies of Berubicin, one in a pediatric population with brain cancer and another, basically a mirror study, of Berubicin in adults. That will be an open-label study.

And so, we actually expect interim data from that study as soon as the third quarter of 21. So fairly rapid potential data for a study of this kind. And we’re expecting a pretty rapid patient accrual in Poland because there’s not another competing study in the entire country of 50 million people in GBM, and every single center that treats recurrent GBM in Poland is a site for that study. So we expect them to enroll rapidly, it’s the exact same patient population, same drug supply, same dosing, same CRO, same database, the whole deal. So, the data that we see coming from Poland really will be a very advanced look for investors at how Berubicin is behaving in our study population in the US here.

DocWire News: And lastly, what’s the overall impact that you think Berubicin can have on patients with glioblastoma?

John Climaco: Yeah, that’s a great question. And it’s a heavy question for me. I’ve been with CNS for three and a half years. Almost every single person that contacted the company in the first couple of years of our existence about when they might be able to try Berubicin either as part of a trial or compassionate use, they’ve all passed away. This is just an absolutely devastating disease.

In fact, I used to wonder when I started with the company, for an orphan disease that only affects 15,000 people, why was it that as soon as I told people what I was doing, everybody seemed to have a story about somebody they knew that had GBM. And then it finally dawned on me that if your aunt’s sister’s cousin’s boss got breast cancer, you probably didn’t hear about it because she probably got better. But if that same person got GBM, you probably did hear about it because she died because almost everyone dies, almost everyone relapses, and eventually this cancer will kill you.

So, to answer your question, what I think is, we can provide hope, which is a very powerful weapon in oncology. We can provide hope that there may be a drug out there at some point called Berubicin that has curative potential, certainly could extend progression-free survival, and extend overall survival. And when you’re talking about a disease where the median survival is between 14 and 16 months, even a matter of months is material. So, we believe that this combination of, again, a tried-and-true class of therapeutics that’s so well-known and understood and so potent against so many cancers can move the needle in this disease.

And one of the other, I think, really exciting things about it is, think about this. 15,000 people a year get GBM, but more like 150,000 patients contract metastatic brain cancer from breast or lung cancer, all these common metastatic pathways to the brain. And once those cancers get into the brain, they have the same challenges that a GBM patient does with the primary diagnosis. That is, we’ve now got cancer in the brain inside the blood brain barrier, how are we going to treat this? And that’s where Berubicin, I think, opens up a whole potential avenue of hope for lots of patients who are dealing with very difficult cancers that perhaps they weren’t caught or cured when they were at their original organ site, and now they can be.

That was really Dr. Priebe’s mission when he set out to create a drug like Berubicin, and that was to create what he calls an organ targeted therapeutic. This molecule was designed specifically to get into the brain. And I think what he wanted to do was set aside the mechanism of action problem and say, “If I could take something that we know works in the test tube against GBM cells, we know it works against all sorts of other cancers, but if I can modify it to get it into the brain, I have a game changer,” and that’s what we’ve got.