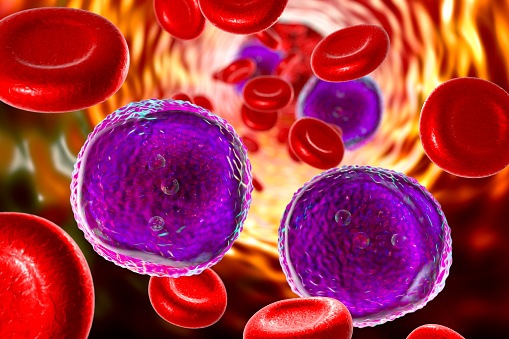 Researchers from the University of Alberta have identified a new mechanism of cell signal inhibition that could prove beneficial to the treatment of blood cancers such as B-cell lymphomas.

The investigational compound PCLX-001, a N-myristoyltransferase (NMT) inhibitor, targets enzymes that perform myristoylation, the modification of proteins with the fatty acid myristate which enables membrane targeting and cell signaling.

“The enzymes that transfer myristate onto proteins are overexpressed in some cancer cells, meaning there’s more of those enzymes, so they have long been thought of as a logical target for cancer treatment,” explained co-author Luc G. Berthiaume, PhD, in a press release.

Treatment with PCLX-001 was found to impact myristoylation of lymphoma cell proteins and inhibit early B-cell receptor (BCR) signaling events, which malignant cancer cells can utilize for development. In addition, the drug was also found to promote degradation of B-cell tumor cells in both test-tube and animal experiments and left non-cancerous cells intact.

Phase 1 trials of PCLX-001 in patients with lymphoma, leukemia, breast, and colon cancer are set to begin at the cancer centers across Canada by the end of the year, according to the researchers.

“We think PCLX-001 is a compound with a large therapeutic window that can kill the cancer cells at a much lower concentration than what is needed to kill normal cells,” added Dr. Berthiaume. “Because of the highly selective nature of our drug, it’s often referred to as a precision medicine, and we anticipate minimal side-effects.”

The team’s findings were published in Nature Communications.

Happy to be a part of this great project. N-myristoylation is a targetable vulnerability in B Cell Lymphomas. #Lymphoma #PCLX001https://t.co/dquOf96Kfe

U of A scientists have identified the mechanism of action behind a new type of precision cancer drug for blood cancers that is set for human trials: https://t.co/1GK6ICYuU0 #UAlberta #cancer pic.twitter.com/LjthYl4n50