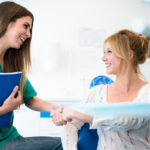 Individual informational meetings led by nurses for parents of children with cancer helped parents feel listened to, gave them a safe space, and provided them with more information about their child’s illness, according to a study.

The study was an analysis of the Person-centred Information to Parents in Paediatric Oncology (PIFBO, acronym for Swedish “Personcentrerad information till föräldrar inom barnonkologin”) intervention, for which 13 parents took part in qualitative, semi-structured interviews.

“The hypothesis was that an intervention based on parents’ self-identified needs and existing knowledge would reduce parental distress and increase satisfaction with care,” the researchers explained.

The intervention nurses were experienced pediatric oncology nurses who also took part in a three-day workshop to prepare. Parents and intervention nurses were to participate in four meetings, either in person or by telephone. The mean number of meetings each parent actually took part in was 3.5 (range, 2-5), and each meeting lasted a mean 51 minutes (range, 15-105 minutes). Fifty-six total meetings took place, most of which were in person (n=37).

The overarching theme of the meetings was “an opening for healing,” which was broken down into three categories, which were further categorized in six subcategories:

The study was published in the April issue of the European Journal of Oncology Nursing.